Unfortunately, due to COVID, may of you students have missed out on the opportunity to complete your medical placement abroad as hoped. But there is still hope for 2022. Going on your medical elective abroad is not without risk, COVID can still be present in clinical and non-clinical settings and there may be regional variants. It is important to consider the following:

Over the next few weeks Medics’ Inn will answer all of your elective and placement abroad questions. Sign up to our mailing list so you don’t miss out on the helpful information we’ll share.

Many medical students will start planning their 2022 medical elective this year. There are so many questions buzzing about:

There is a lot of uncertainty and anxiety in society at the moment, Medics’ Inn would like to share with our community something positive.

Seun Sanni and Nneka Chile wrote a fantastic report on John Amanam, a Nigerian artist solving the problem of unrealistic prosthetic limbs for darker skin. He creates realistic and affordable limb prostheses, giving many people the opportunity to have a better quality of life. We’ve included this short interview from Youtube, but you can read more by reading the full article written by Seun Sanni and Nneka Chile at Reuters.

Written by the talented Kemi Falodun, a writer and journalist based in Nigeria sharing underreported stories. We loved reading her article on living with dementia in Nigeria. It touched on multiple serious issues such as age discrimination, elder abuse and the conflict between culture and modern medicine in a way we don’t often see.

“Care-givers and medical professionals in Ibadan are confronting a growing problem with love, patience and medication.“

Ibadan, Nigeria – Before she started to forget things, Elizabeth Mustafa was relearning how to walk. Her diabetic foot ulcer had gotten out of control and her right leg had been amputated.

Leaning on her four-wheeled walker, she would try to manoeuvre herself around the house as someone, usually her daughter-in-law Victoria, accompanied her, watching, guiding, removing objects from her path.

Three years before she lost her leg, in 2010, Elizabeth fled religious rioting in northwestern Nigeria after receiving threats that her house and grocery store would be burned down. Seeking safety, she moved to Ibadan to live with one of her six sons and his family.

She loved telling her four grandsons stories about life in Ghana, where she was born and lived with her parents until 1969 when Ghana’s then-prime minister, Kofi Busia, passed the Aliens Compliance Order, forcing African migrants – many of them Nigerian, like Elizabeth’s parents – to leave.

Now 66, Elizabeth still enjoys telling stories about her life back in Ghana. The boys sit around her in their living room in Alarere, Ibadan, listening attentively and chipping in with anecdotes of their own as she remembers the school she attended, the friends she had.

“They [Ghanaians] are nice people. They show love,” she says in Ashante Twi, before translating it to English.

A smile spreads across Elizabeth’s face as she eases herself onto the brown sofa, holding a small radio to her belly.

“She remembers things from long ago. All others are pockets of memory,” Victoria Mustafa explains gently.

The Mustafas live on a neat, quiet compound. The white-walled living room is punctuated by cream curtains that drape the windows and the entrance to the passageway leading to the bedrooms.

Victoria says this was where they were sitting a few years ago, shortly after the amputation, when Elizabeth suddenly asked: “Where am I? What am I doing here? What’s the name of this town?”

Some mornings, Elizabeth would hold a tube of toothpaste for minutes, staring at it, before finally asking what it was used for. There were times when she could not remember the names of her relatives.

“We were thinking, ‘What’s this? What’s going on?’ We didn’t understand what was happening,” says 42-year-old Victoria, who is wearing a purple shirt – the official colour of the Alzheimer’s awareness movement.

Victoria, who is from Kaduna, first met her future mother-in-law in 2004, two years before she married her son and moved to Ibadan.

“She was active and loved to tell stories,” she recalls.

The change seemed sudden. Initially, the family assumed she was seeking ways to cope with the loss of her leg. Then they grew irritated with her.

“We thought she was just being difficult,” Victoria says.

It was when she started to wake in the middle of the night, struggling to reach her walker, demanding that the door be unlocked so that she could go and open her grocery store, that they realised something was wrong.

The full article was published online at Aljazeera, have a read, let’s discuss.

Image: Elizabeth Mustafa in the home she shares with her son and his family in Ibadan [Ayobami Ogungbe/Al Jazeera]

The coronavirus has raised concerns worldwide, “As of 9am on 8 March 2020, 23,513 people have been tested in the UK, of which 23,240 were confirmed negative and 273 were confirmed as positive. Two patients who tested positive for COVID-19 have died.” according to www.gov.uk. 2 cases have been confirmed in Nigeria, the first case was a patient who travelled from Milan Italy to Lagos Nigerian. The second patient was identified as someone who had been in contact with the first patient, both cases are clinically stable. Sources: BBC, The Guardian and Nasdaq.

What is Nigeria doing?

Due to the dynamic nature of the situation, it is difficult for us to provide you with specific advice. For those going to Nigeria (or elsewhere) for a medical placement, there are some questions you should ask yourself:

It is important to be in regular contact with your medical school before travelling to Nigeria (or other host country) so you are fully aware of any advice updates or changes in regulations. We recommend you have adequate health insurance, travel insurance (which may cover cancelled flights or have an allowance for flexibility) and a detailed plan for repatriation if it were necessary.

Although there is always more that can be done in these situations, let us remember the successful eradication of Ebola by Nigeria a few years ago.

For more information about the outbreak, travel and how to stay safe, visit:

A team of UATH doctors on Tuesday successfully separated a set of conjoined twins at University of Abuja Teaching Hospital Gwagwalada. Dr Olori Samson, one of the surgeons who carried out the operation, said the parents visited the hospital on June 11 following a referral from another hospital.

“On their arrival at our facility on June 11, 2018, having been referred from St. Mary Catholic Hospital, Gwagwalada where they were delivered through a Caesarean section, there were different hurdles. But the first hurdle was not on the surgery day but during the pre-surgery days. That is, making sure the babies were kept alive, which we delicately addressed.

“The other hurdles were anticipated based on our findings because after the initial clinical assessments, there were several CT scan investigations to determine the organs that were joined. So, we discovered their livers were joined. We had five sessions of all the teams coming together to plan and determine the best approach. We had anticipated the bleeding that would take place because the liver is one organ that you can’t really tie. So, the hospital management provided some modern gadgets we deployed to make sure the surgery went well. It did go well as we contained the surgery of about five hours. With what we had available to us, we hadn’t any fear that we would succeed in getting to the root of separating these babies,” Mr Samson said.

Speaking at a press conference in Abuja on Friday, the Chief Medical Director (CMD) of UATH, Bisallah Ekele, said the babies are in good condition. “As we speak, today (Friday) is the fourth-day post-surgery. The babies are stable and in good conditions. We took a decision as to when the operation would be done considering the fitness of the babies and on 29th October, we went to theatre and after four and half hours, the corrective surgery was done,” he said.

The father of the twins, Ferdinand Ozube, said he is grateful for the assistance and care rendered to his family by the Hospital in its trying moment. He said he had heard about and watched conjoined twins on television but never thought he would have them.

Millennium Park Abuja is the largest public park in Abuja covering, approximately 32 hectares. It is located in the Maitama district of the federal capital territory. The Millennium park was designed by he Italian architect Manfredi Nicoletti,commissioned in December 2003 by Queen Elizabeth II.

Its a lovely place for bird watching, a picnic, walks, jogging, other outdoor and group activities.

This is definitely a spot to visit while on your elective in Lagos as a group or even by yourself. I went with some lovely friends and we easily arrived at the centre by taxi. The cost of entry and canopy walk is relatively inexpensive N2000 (approximately £4-5/$5-6). We enjoyed the grounds and canopy walk with another group, friendly and informative guides.

The grounds have some beautiful birds including peacocks, we were told the swamp region had snakes, to be honest I was glad I did
not see this! There were many areas we could relax and play  megasized
board games like chess.

I enjoyed the canopy walk the most. The view was beautiful! The canopy is quite high (one of the highest in Africa), so its best to avoid if you have a fear of heights. Always stay hydrated with a bottle of water, although there is a small canteen you can buy some refreshments from. 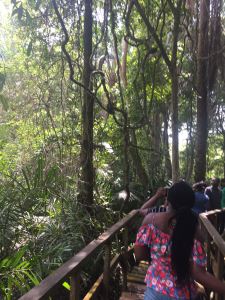 Also remember to take an extra something in
case it rains, like an umbrella or foldable raincoat – in my case I had neither
and got wet, but the showers didn’t last too long. Also appropriate shoes would be best, otherwise you’ll feel the need to wash your feet at a tap at the end of the walk like we all did! haha

This is definitely a spot to visit while on your elective in Abuja or Gwagwalada. After shopping at the at Shoprite in the Central Business District, Abuja, I visited the Abuja Arts and Craft Village, just few minutes walk away.

There are many beautiful authentic, hand crafted jewellery items, small furniture items, baskets, mats, sculptures, pottery, paintings, other art pieces and fashion items which vary in price. This is a great spot to buy for holiday souvenirs and gifts for your loved ones at home. Definitely bring your A game and be ready to bargain!